Home » What is Coroner Inquest Neglect?

What is Coroner Inquest Neglect?

The death of a loved one can cause an enormous amount of pain, such pain that blurs everything else out. Dealing with the pain and trying to get by with your daily life is a herculean task. Even in this state of mind, if you think that the death of your loved one was caused by medical negligence, then you can approach a medical coroner to investigate the death. 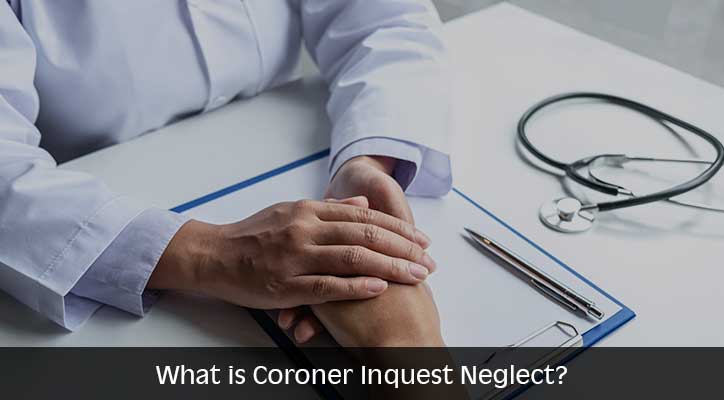 Simplest way to define inquest is – investigating cause of death. On the other hand, you can define a coroner as an official who holds an inquest into mysterious, violent, sudden and suspicious death.

With or without a coroner’s inquest report, you can file a lawsuit and make a claim for wrongful death. We work with a panel of experienced no win no fee medical negligence solicitors, who are specialists in bringing forward claims. If you believe events leading to the death of a loved one could have been avoided, speak to us today and our solicitors will evaluate your case and advise you on how to go about your claim.

Not all deaths require an inquest by a medical coroner. A coroners services is needed if there is reason to believe that:

If the cause of death is unknown, the coroner can then start a post mortem examination. If the result shows that the cause of death is non-violent, then there will be no need for an inquest. In cases such as this, there is a possibility of foul play, it is not wrong to employ the service of a coroner to get medical inquest into death.

On the other hand, a fatal medical negligence claim, involves making a claim that there was some sort of wrong treatment that resulted in death. Most times this comes before or after the coroner’s inquest result comes in.

Whilst an inquest after death tries to find out the cause of death, a claim tries to get compensation for the loss. In cases of wrongful death, a claim almost always comes after an inquest; this is not always the case because statistics shows that a lot more people make medical negligence claims for wrongful death even without an inquest result (a coroner’s verdict doesn’t determine the validity of a claim, it only acts as supporting evidence).

The Scope Of An Inquest

Death by hospital negligence or any other form of negligence has to be proven before a claim can be made, whether by inquest or not. One of the purposes of an inquest is to bring proof of death by answering the many questions surrounding a suspicious death. Here are some of the important questions an inquest answers and borders its results on

There is a process to it, from beginning to end. All usable evidence for the case must revolve around the answers to these questions; anything outside these might not be considered. An inquest sets out to answer as many questions as required for public use, nothing more.

According to article 2 of the European Convention of Human Rights, it is required of governments to “establish a framework of laws, precautions, procedures and means of enforcement which will, to the greatest extent reasonably practicable, protect life”. From the European Court of Human Rights interpretation of this article 2, inquests have become confined to a scope that focuses on answering the question, “by what means and under what circumstances” death occurred.

Whatever the outcome, you will need the professional services of a legal counsel, and that’s why we are here for you. Our inquest solicitors go beyond what is seen to make the best of your case. Even if the death occurred in an NHS facility, we will guide you all the way till you get the NHS negligence death compensation that you deserve. This is regardless of the coroner’s inquests verdict.

There is not a comprehensive list of inquest verdicts, and because cases vary in conclusion, so will the verdicts also vary. The following are few of the most commonly used inquest verdicts:

Just as it is when doctors misdiagnose their patients, it is possible for coroner’s to fail in giving the right verdict in a case. And besides, there are many legal injunctions that govern the operations of the coroner, which means that he or she might not have the required expression levels to get satisfactory evidence that could lead to better and more authentic verdicts.

In order to advance your case or make a claim, you will need to avoid a solicitor who is experienced in cases like this, who can pick up from where the coroner left off from or run a separate investigation into the case.

You can leverage on a free consultation with any of our experienced solicitors to know your standing and the potentials of your case and claims. Due to the delicateness of issues concerning the death of a loved one, it is not something to gamble or leave to fate and peripheral examination. That’s why it is advised to involve an experienced lawyer from the onset – especially in ‘hospital neglect’ cases that led to death, to avoid going back and forth amidst the pain of losing someone dear to you.

What if an inquest fails?

There is no particular way to know and prove coroner inquest neglect, but it is very possible that a coroner’s inquest will fail to fall through. The job of the coroner is not without hitches; there are a thousand and one ways a person could have died out of neglect, meaning that there is no one place to look when investigating. The fact that a coroner also works within confined or restricted boundaries, even makes the work more difficult. In the end, a claim gives more room for investigation than a coroner’s inquest.

Therefore, there is no guarantee that medical inquest into death will give the right outcomes at the end of its investigation. An inquest produces way better results, if subjected to the right perspective and scope during investigation, anything other than this, will not deliver. For example, a coroner might investigate the events of the hours preceding death, and get nothing, because the death was due to medical neglect that happened earlier during the treatment.

So, you see that there are high chances of coroner inquest neglect, and that you can’t rely on the procedure entirely. A closer look at the scope inquest shows that the process doesn’t answer questions like, “how did the deceased die?” or “what are the specifics of all circumstances surrounding the death?”, rather it focuses on a more limited question, “how the deceased came to their demise”.

In any case, if you are not satisfied with the results from a coroner inquest into the death of a loved one and wish to take the case further than that, you can then involve a legal counsel. Our dedicated team of medical negligence claims solicitors who understands how to prove hospital negligence and any other form of negligence, are willing to help you through this hard time. They will guide you from the beginning to the end of the case, till you get a ‘medical negligence resulting in death’ compensation that is due you.

From the beginning, we have made it as clear as possible that you can’t get compensation with just the result from the coroner’s inquest, you will still need to make a claim and file a proper lawsuit to get compensation.

Of course, we understand that with a fresh loss to deal with, it will be difficult to be thinking of monetary compensation at the time. But if you move beyond the coroner’s inquest and push a little more by getting a compensation, you will be able to:

There is no fixed amount that can be received in compensation for wrongful death or fatal claims, but the average payout for medical negligence resulting in death in UK courts spans £12,500 – £51,460.

At Medical Negligence Direct, we serve as a bridge throughout the entire process. We help you lift the burden of all the logistics and do all the important running around for you from the onset even to the end of the case.

How does a coroner determine a heart attack?

The most effective is through an autopsy. A characteristic blood clot is usually found in the coronary arteries of Patients who die from a heart attack. Also other signs such as enlarged heart, dilation of the chambers of the heart, and breakdown of the vessels supplying blood to the heart can indicate heart attack.

Can a coroner rule negligence?

A coroner cannot rule negligence or judge a case as criminal or a civil liability, but his/her report can provide relevant evidence to prove negligence.

Why would an inquest be discontinued?

An inquest might be stopped if the coroner comes in contact with evidence that gives him/her reason to believe that the death might have been caused by unnatural forces.

Neglect in medical terms, relates to action(s) that could hamper the life of a patient. It could be in treatment, diagnoses or even care. When a patient does not receive standard care, his or her life could be on the line. This is the medical negligence definition UK courts operate with.

If you have lost a loved one due to acts of negligence, and you believe strongly and can provide evidence to back up your claim, we can help you.

Feel free to contact us today on our phone lines 08006444240 for a free no obligation claim evaluation.