According Recent Report, After the controversial whistleblower incident that led to two directors at the West Suffolk Hospital stepping down from office, the hospital has yet been unable to sort out their treatment of midwives and other hospital staff. This is according to a new whistleblower letter that was sent to Bury Free Press, West Suffolk Foundation NHS Trust, and the Care Quality Commission (CQC), sometime in August.

The Care Quality Commission (CQC) acknowledged receipt of a copy of the letter and stated that the commission will hold on for the result of the Trust’s investigation of the issues raised in the letter. A spokeswoman of the commission confirmed this when she said, “We will use the information received as part of our ongoing monitoring of the trust.” Important to note that this hospital and its maternity has been tagged, “requires improvement” by the Care Quality Commission (CQC) in June.

The letter expressed the grievances of Midwives at West Suffolk Hospital in Bury St Edmunds. It stated that Midwives at the hospital were “exhausted and broken”. The letter also went further to claim that the unit was “consistently short-staffed”.

The letter asserted that the Midwives’ outcry was necessary because the hospital was plunging in all standards of care at an alarming rate. It stated that the Midwives’ were “under extreme pressures all the time, which has left them fed up, exhausted and burnt out” When things like this happen, mistakes which lead to midwife negligence spikes. This is partly responsible for the rise in midwife negligence cases across the UK.

This claim didn’t pass without any response from the West Suffolk NHS Foundation Trust, which runs the hospital. The Trust said that it provides a “safe and caring service”; and with this, they mean both staff and patients alike.

In response to the whistleblower letter, the Interim Chief Executive of the West Suffolk Hospital, Craig Black, commended the action taken by the anonymous writer. In his words, “it is absolutely the right thing to do.” This was gathered from Local Democracy Reporting Service, in their report of the conversation between Craig Black and the health scrutiny committee. 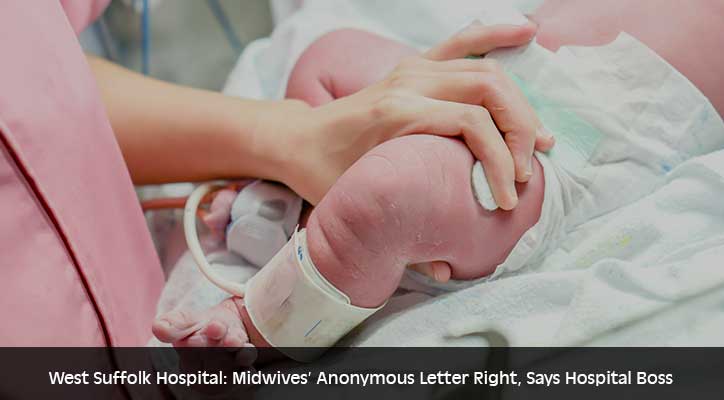 Black went further to say that, “This is an opportunity to thank those members of staff that did feel so committed to the level of service they were providing on a daily basis that they felt the need to publicly air those concerns.” This is a direct contrast to the response of the directors at the hospital during the first whistleblowing incident.
They had mandated their staff members to undergo a biometric capturing process, a few days after the letter was published. This brought the entire hospital management and her staff members under heavy criticism and laid bare the hospital midwife negligence suspicions which were already becoming popular news.

What Can Be Classed As An Act Of Negligence?

On her part, the executive chief nurse of the hospital, Sue Wilkinson, said that a meeting was called for immediately. In the meeting, the midwives’ were given room to express their concerns and they did. As a result of the meeting, she said that a new system was being put in place which would help lift the heavy reliance on community midwives, which has happened for a long time but “has not solved the problem but gone some way to mitigating the problem”. This is a commitment that could alleviate the already existing hospital negligence.

In another meeting of health bosses, it was unanimously agreed that staff levels in midwifery services would be immediately increased. The increase will be powered by the involvement or employment of new midwives – whether new to the Trust or just newly qualified. The chief Nurse, Ms. Wilkinson, also added that the hospital was “working on a long-term plan” for midwifery with other NHS trusts in the region. This, we believe, will significantly reduce the midwife negligence claims that have been on the rise in the region for a long while now. It is definitely a welcome development.

As a backup to this, Karen Newbury, head of midwifery at the trust, in her statement said; “We are working exceptionally hard to recruit additional midwives and we are very grateful for the flexibility and dedication of our staff in ensuring that we provide a safe and caring service.” She added that the trust had recruited new midwives “to provide flexible and experienced support to our maternity teams”.

Here are other details included in the whistleblower letter:

“The unit essentially runs on the goodwill of staff. However, due to the atmosphere at work being so unpleasant and morale being so low, our goodwill is rapidly running out.

“It should not be accepted or tolerated for us to be forced into giving unsafe care entirely due to unsafe staffing.”

If you have been wrongly treated in a hospital where you were supposed to receive adequate treatment, it is important that you get justice for the accompanying pain and suffering following the incident. At Medical Negligence Direct, our expert negligence claims solicitors are specialists with enormous years of experience in handling hospital negligence and midwife negligence claims.

You can speak to one of our solicitors today 0800 644 4240 for a free claim evaluation to know if you’re eligible to get compensation.