According to a recent BBC report, Heartbreaking testimonies from care home workers on the frontline paint a scary picture of life and death at the peak of the COVID-19 outbreak in care homes. Twelve months on from the peak of the pandemic, the calls for public scrutiny are on the rise.

Damian Mann, a nursing associate, called for further attention to be given to care homes in order to save the lives of people he has now come to know as family. Damian is a staff member of Wren Hall Nursing Home in Nottinghamshire, and witnessed the death of 13 residents with COVID-19 between the end of March and mid-April 2020. “Some of the people have lived here for five, six years. I see them more than my own family… and then they’re not here anymore”, Damian recalls.

Although he was one of only a few care home staff who didn’t contract the deadly virus, Damian felt powerless as he saw resident after resident pass away to this cruel disease in a hastily set-up isolation unity. 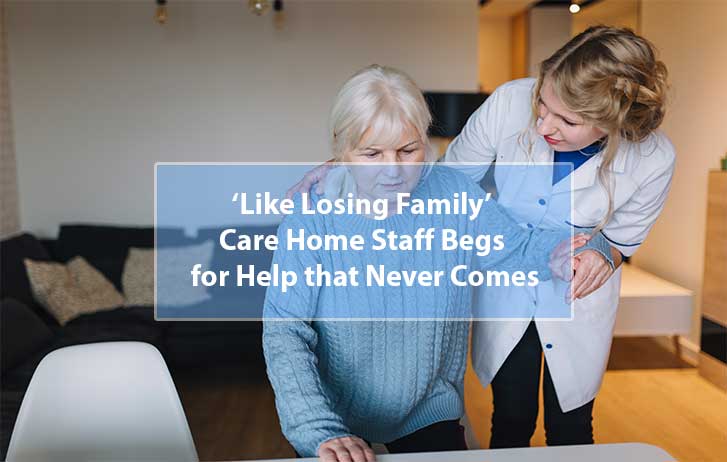 Discussing the emotional connection between workers and residents, he says, “we would always make sure someone was with them… you thought to yourself, if I emotionally connect with every scenario, you’re going to have a breakdown because you are not going to be able to get yourself right.”

At the time, the government invested most of its efforts into ensuring the NHS was not overwhelmed, but the number of care home resident deaths continued to increase rapidly.

According to the Office for National Statistics, the highest number of care home deaths happened on Easter Sunday, 12 April 2020, with 495 of 1,300 resident deaths COVID-related. Patients were hastily discharged from hospitals to care home facilities without adequate COVID-19 testing, exposing care homes with insufficient medical support to the risk of infections.

Damian recalls that governmental guidelines were such that PPE should be changed every time a care home worker assisted a resident, but this guidance only lasted two weeks; Damian says, “within two weeks it changed so you could then help three individuals and then change your PPE. You were thinking it doesn’t seem right and feel comfortable to be doing this.”

Anita Astle – manager of Wren Hall Nursing Home – was so desperate to alert people to the goings-on in social care. While NHS staff were hailed for their efforts towards ensuring the health and safety of its patients, nothing was done about social care. “Feeling numb – lost nine family members (residents) in the last few days… It is probably a safe state of affairs that I don’t feel angry. I just feel that’s the norm”, she tweeted on April 12.

On the same day Anita posted the tweet, Jean Adamson paid a visit to her father’s care home facility, but was only able to see him through the window. He had contracted COVID. Despite his strength and fierce independence as described by Jean, he “went downhill so quickly.”

It was the last time Jean saw her father. “I still need to know why my father died in a place where he was supposed to be safe from harm”, Jean says. “The government has a legal and moral responsibility to get to the truth, so that people who are bereaved like myself, get the answers and can grieve and get closure, and also, to save people’s lives in the future.”

On 15 April, the government published a social care plan. In a Downing Street press conference, Health and Social Care Secretary Matt Hancock said: “from the moment of the emergence of coronavirus, we’ve known that some of the most vulnerable to this disease are in social care, and we’ve been taking action right from the start.

However, while all of the government’s efforts to curb the spread in care homes is greatly appreciated, it is deaths that could have been avoided that makes the whole situation a sad one.

According to a government spokesperson, staffing has been increased “to identify new cases and protect residents, while providing almost £1.8bn in specific funding for adult social care and access to over £6bn for local authorities to address pressures on public services, including free PPE for adult social care.

Our vaccination programme is the biggest in NHS history, and through the rollout we have visited every eligible care home in England, offering life saving vaccines to all residents and staff.”

How we can help you

Social care is on the frontline of patient safety in the fight against the deadly coronavirus. As a result, more should be done to protect the health of its patients. If you or a loved one has suffered an injury due to care and nursing home negligence, you may be able to make care home negligence claims. Contact us today on 0800 644 4240 to speak with one of our friendly lawyers and find out how we can help.