Contact us for a free no obligation assessment, if you have been a victim of “failure to remove foreign objects during surgery”. You have every right to claim compensation to help deal with the associated cost of ongoing care of financial loss due to negligence.

The problem of retained objects or retained surgical bodies (RSB) is most commonly associated with surgeons, healthcare facilities, hospitals, and the whole medical team involved in a patient’s surgical procedure. The failure to remove foreign objects from the patient’s body during and after surgery poses potentially harmful repercussions to the patient involved.

For one thing, retained foreign objects might be life-threatening and in most cases, patients may have to go under the knife the second time. The consequence of foreign objects left in the body after surgery might manifest in various forms immediately after the surgery is concluded, or might even take months or years. 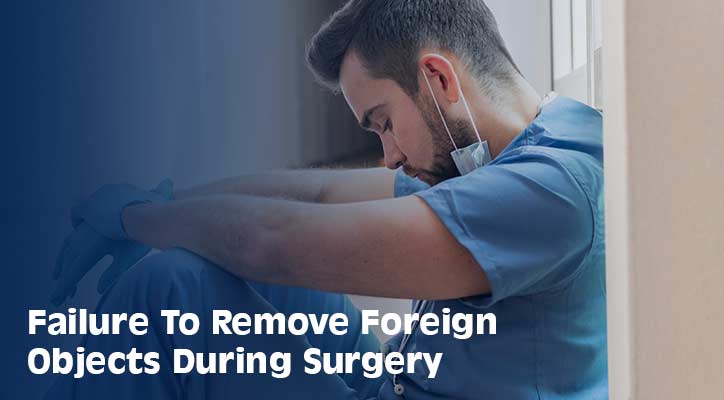 How Often Do Experts Make This Medical Mistake?

Surgery is a very challenging process, especially with the high risk of retained objects increasing specifically in very complicated cases. During surgery, mechanisms are in a set order, as preventive actions, to build a safe and workable environment for the patient and surgeon to work excellently. However, these medical practitioners are not immune to human and medical error, hence, the possibility of failure to remove foreign objects from patients bodies during or after an operation.

The most popular objects forgotten in patients after operations are surgical gauzes, sponges and swabs which are used to absorb and stem the flow of blood during an operation. However, in rarer cases, metal and solid objects such as scalpels and clamps have been discovered. These are some of the most common medical mistakes associated with surgery.

With over 28 million surgical operations performed around the UK, the estimated number of cases where foreign objects are left behind in the patient during surgery is at about 1500 cases in a year; usually in a 1-out-of-1000 ratio.

This may seem like a small fraction, however, the consequences of these acts of medical negligence do not only involve the victims but also their families, spreading the ratio of impact to a broader spectrum.

Very commonly, foreign objects discovered in the patient after surgery happen as a result of non-specific complaints. The retained objects can manifest as a mass in the abdominal region and are very commonly diagnosed during routine radiological examinations. This is usually suggested if the patient complains of a palpable mass, pain, and frequent infections in the immediate period after the operation.

Concerning the type of foreign objects left in the body after surgery, sponges are said to be the most common.  For days, months and even years, before presenting as inflammatory reactions, these sponges might remain in the body. Immediately retained objects are suspected, a diagnosis should be confirmed by computed tomography (CT). Failure of a medical professional to do this is a clear act of negligence. .

These foreign objects are mostly left in the abdominal cavity, and the types made of stainless steel, such as retractors, may cause minimal reactions. Although all foreign objects have the potential to harm, cause pain and obstruction, and more critically, ileus or abscess.

Excellent communication within the operating room is very important for errors to be managed to the barest minimum, during surgery. This is an important practice because the retention of RSB after an operation has both medical and legal implications; and may be charged as mistakes by the whole medical team, and not only the surgeon.

What Happens When Foreign Objects Are Retained In The Body?

Retained Surgical Bodies are liable to cause severe damages when left behind in a patient’s body. These damages include worsened and even new injuries. Such as medical malpractices is a case where a sponge is left inside a woman’s body after its usage for excess blood absorption during childbirth. This, unfortunately, results in pain, severe infections, and many other health problems if not properly and immediately addressed.

Some common injuries that result from RSBs

In case you suspect that a foreign object has been left behind in your or your family’s body after an operation, seek immediate, alternate medical attention, and contact a medical negligence solicitor, or an attorney. The issue must be immediately attended to, to prevent further damage.

Signs Of Having an RSB:

Many people find themselves imagining all the possible worst-case scenarios, and while we can keep hoping that these possible scenarios do not become reality, the truth is that injuries sustained due to surgical negligence are one of the most popular reasons for lodging claims.

In the case that you have suffered injuries during a surgical process, it’s right for you to legally pursue operation gone wrong claims; and it’s time to make contact with our team of the best medical negligence solicitors.

To seek trusted medical attention, and to contact an attorney immediately after any of these incidents is double-fold. You can lodge a claim for compensation for medical bills and losses incurred (which may have probably increased due to the presence of retained foreign objects). The compensation claims cover the added cost of recovery, corrective surgery, rehabilitation, pain and suffering.

What Do You Need To Pursue Claims?

Usually, compensation awarded for damages in cases of medical negligence are grouped into two, which are namely;

To recover damages incurred due to clinical negligence, the patient must prove some elements to the Judge, to be qualified for an award of compensation. The elements for which the victim must show evidence include the below listed.

The fulfilment of this evidence procedure is very sensitive and tricky, especially for a novice. This is where you need to MEET OUR TEAM.

How Our Team Can Help

Our experts are specialists with enormous years of experience in handling medical negligence claims. We understand that the above-stated procedures of proof sourcing may be difficult to carry out in clinical or medical negligence claims, because the defending hospital or doctor or medical adviser may affirm their perfectionism, and claim that the treatment process you have experienced under them has not been negligent in any way.

Our able team of solicitors are disposed to help you source for more proof, because once you establish the fact that they were more likely negligent than not, you stand a great chance!

After we have obtained enough details about your case, we will write a statement of evidence, and extensively state your current situation, the conditions of your treatment process, and the value of medical negligence compensation claims expected.

Evidence will include the proofs you provide, and the ones we help you source for. It is on these proofs that we will base the needed procedural steps, to make sure we establish a solid ground for your negligence compensation claim.

We will make sure the statement is very comprehensive, as much as it can be, then will submit it as a “Letter of claim”, on your behalf, to the defendant.

In order, after the letter of claim is submitted the defendant which is the medical practitioner involved in your case, hospital or NHS — in case of clinical negligent actions by the NHS — will confirm receipt of the statement, and will then be allowed enough time to investigate the lodged case; and thereafter admit to liability or deny liability.

It is in the case where the defendant conforms to their malpractice that negotiations will be made between them & the claimant’s solicitors  us, for your deserved medical negligence compensation or damages. However, If the defendant denies liability, your case may then have to be taken to court, and heard at trial. In this case, a credible and professional medical negligence solicitor will be assigned to represent you.

This is to say we try to resolve all cases out of court. Hence, we advise that all complaints be brought to us immediately after medical negligence is noticed because, at this time, the value of compensation is undiminished and best for covering the claimant’s damages.

Our No Win No Fee Basis

If you’ve been wondering what our legal cost is, you don’t have to worry! Our services are free to our clients, and it’s only after you have been awarded damages that we will require you to pay us a SUCCESS FEE which is usually a percent of your total compensation.