Can I Claim For Medical Negligence After 20 Years - MND
Working Time:

Home » Can I Claim For Medical Negligence After 20 Years?

Can I Claim For Medical Negligence After 20 Years?

The popular advice every legal counsel, who is experienced in medical negligence cases, gives victims of medical malpractice is to report medical misconduct as soon as they realize that there was a breach in duty of care resulting in harm. Read this article further to find out how long to sue for medical negligence. 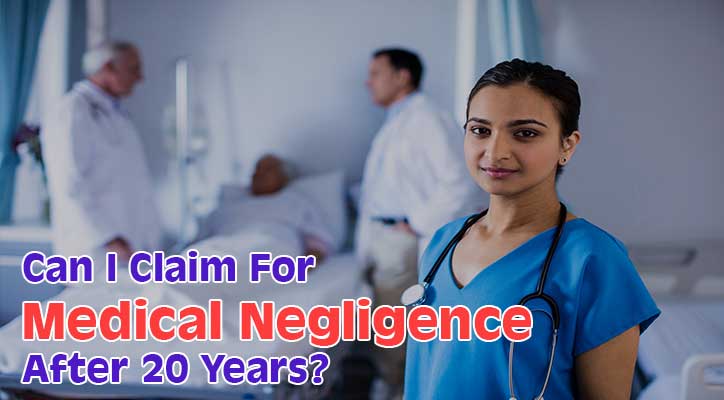 In a typical healthcare setting, a patient’s well being should and must be the primary concern of his/her doctor or caregiver. If you have suffered harm as a result of your medical professional’s action or inaction or simply failure to provide the requisite standard of care obtainable within the medical practice, you may be eligible for a claim.

How Can I Show That My Doctor Was Negligent?

The most important aspect in making a claim against a doctor or suing a hospital for negligence, is detecting and proving that a negligent action was indeed committed.

To prove negligence or breach of duty of care, it is important to get an experienced solicitor on your side. A good solicitor will start by getting a medical professional to ascertain the validity of your claim.

Medical Negligence Direct, our hospital negligence claim solicitors work with independent medical experts who are directed to investigate the client’s claim and report whether or not the medical professional acted negligently. The solicitor will know your claim is viable if it falls into any of these 4 types of negligence;

Importance Of Making An Early Claim

It is true that in certain cases, you can make an ‘operation gone wrong’ even after ten years. But, is there any reason not to make the claim earlier if you knew about it? While, it is possible that a medical error, such as surgical mistakes, can go unnoticed for a long while; filing a surgical error lawsuit earlier can give you a better advantage to win the case and ask for a compensation whilst also beating the statute of limitations UK courts recognize and follow.

Time Limits In Taking Legal Actions For Acts Of Negligence

Usually, you have only three years to make your claim, but claims over 3 years can still stand. However, you have to understand how it works.

A lot of people still think that they can’t make a negligence claim after 3 years from the actual date of a negligent treatment. This is a misconstruction of the actual truth. If you have suffered a worsened condition due to negligence, or you want to take action against medical accidents caused by the doctor(s), the NHS, and your GP, you have 3 years from the date of knowledge of the negligent treatment to do so.

What this means is that your case becomes valid from the day you realize that a medical fault has been committed, even if the error was done 10, 20 or 30 years back as long as it is not more than three years since you became aware of it.

Some Exceptions to Limitation Act Include;

The statute of limitation is the maximum time period which can go by from the time a cause of action takes place till a claimant files a lawsuit or makes a claim in the court. In the medical field, it means the time limit for making claims after a medical error has been committed.

Under the Limitation Act 1980, a malpractice claim can be made within a three year period. By constitution, if a claim is not made and its case is not brought to the court before the expiration of this clinical negligence limitation period, the case will then be considered statute barred. This means that if a case exceeds this time limit, the case won’t be considered anymore.

The impact of this limitation period on medical practice claims can upturn the case in the defendants favor even when the plaintiff is in the right.
For example, if a doctor that works with an NHS sponsored hospital misdiagnosed a patient and the patient becomes aware of this misdiagnosis 6 months later, but couldn’t push for a claim – even though they knew how to sue NHS for misdiagnosis – until after three years because of the adverse situation of the medical error, suing the NHS for misdiagnosis later than the stipulated 3 years can be very difficult.
A claim made after 3 years, especially when the patient was aware of the error earlier, will be difficult to fall through.

There are two ways to look at lawsuit statute of limitations:

Note: you have to check medical malpractice statute of limitations by state because different countries and states have different stipulations in their individual statutes.

As stated earlier on, it is possible for a patient who suffered some form of medical malpractice, to be totally unaware of the error until long after it occurred. A doctor’s mistake during a surgical process, which is also called surgical error, might go unnoticed for a very long time before the patient begins to feel symptoms of another illness or the same medical condition due to the mistake.

For example, if a patient experiences a medical malpractice in an NHS sponsored hospital, which he/she is unaware of until the end of a very long time. In a case like this, even if this takes up to 10 years to come to this realization, the three year limitation will start counting from the date of that knowledge. This also applies to the NHS negligence claims time limit, and if you’ve ever wondered ‘Can I sue the NHS after 10 years?’ Yes you can.

According to the Limitation Act, the date of knowledge is wherein the patient realizes any of the following:

Getting A Compensation For Your Suffering

Compensation serves as a remedy to victims of medical malpractice. The intention is that they will, with the compensation, cover new medical bills, recover costs and lost income, and recover the cost of litigation and many more. Compensation can only be given when it is proven that the doctor or hospital was negligent.
Some of the areas our solicitors specialize in includes but is not limited to:

Note that there is no fixed amount that must be paid as compensation. According to the NHS Litigation Authority, NHS negligence average payout has pegged at £50, 000 – however, compensation amounts can fall anywhere between £1, 000 and several millions of pounds depending on the nature of injury suffered, severity and damages incurred. This means that compensation payout will vary from one case to another.

Filing A Lawsuit Against A Hospital

Want to know how to file a lawsuit against a hospital? You can take the steps below

How much compensation for death?

It is also good to bear in mind that there is no fixed compensation for all cases. Settlement payout varies based on the nature and severity of harm to a patient. Usually, severe cases attract higher compensation values than less severe cases. Death compensation May span from anywhere between £1, 300 – £22, 000 and even more.

Is there a time limit to file an insurance claim?

How Long Does It Take To Settle A Malpractice Case?

An average claim for doctor negligence can take up to 12 – 18 months to be resolved. But many times, even much more depending on the details of the case.

Before worrying about NHS negligence time limit, your ability to prove that there was indeed a breach of duty will heighten your chances of bringing successful claims. If you are unable to prove that a medical error has been committed by your doctor or the hospital, you will not have a case.

Have a personalized question? Feel free to reach out to us today. You are also entitled to a free no obligation claims assessment of your claim.  You can give us a call on 08006444240 to speak with one of our expert solicitors.